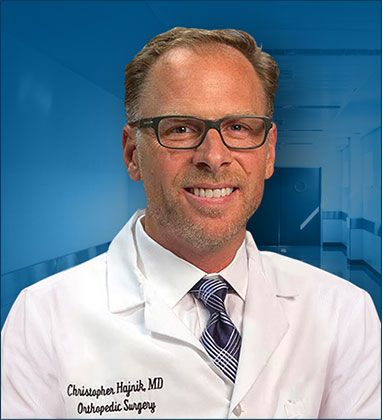 Dr. Christopher Hajnik has practiced at CORE Orthopaedics in Encinitas since 2011. He is fellowship-trained in joint reconstructive surgery of the knee and hip. His subspecialties include primary knee and hip joint replacements and revisions, subchondroplasty, and knee surgery.  He utilizes robotic and computer-assistance for partial and total knee replacements, and he recommends and performs anterior hip replacement surgery.

Dr. Hajnik brings a uniquely personal perspective to his orthopedic practice. While at the University of Notre Dame, he captained the NCAA National Champion Fencing Team. The wear and tear from this athletic endeavor, coupled with his previous participation in youth football, baseball, basketball, soccer, wrestling, and golf has left him with early-onset knee arthritis. Despite x-rays which confirm his own candidacy for knee replacement surgery, he manages his knee arthritis with a conservative regimen consisting of low-impact exercise and occasional over-the-counter pain meds. He recommends an initial conservative, non-operative treatment plan for his patients as well.

Dr. Hajnik lives in Carlsbad with his wife, Vanessa, and their two daughters. Since 2011, he has volunteered as team physician for Carlsbad High School. He and his partners provide yearly physicals for the athletes of Carlsbad and La Costa Canyon High Schools at no charge. You can find him on the sidelines during football games. In his spare time, he enjoys watching college football, free diving, and golf.